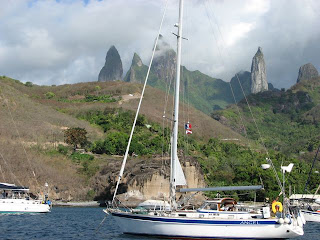 Ua Pou, Marquesas Islands - note the spires above the anchorage (volcanic plugs from the crater) 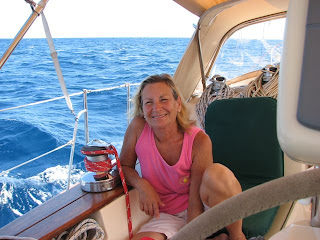 Sailing in the Marquesas Islands 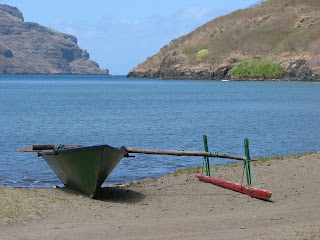 Local boat inside a harbour 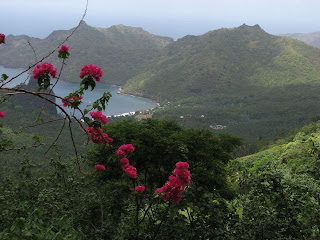 Another anchorage on the north coast of Nuku Hiva 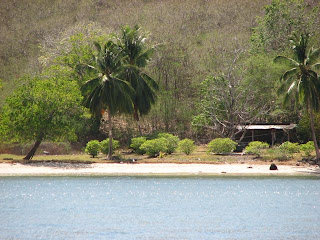 Daniels Bay, Nuku Hiva - an anchorage for us and the film set for Survivor. 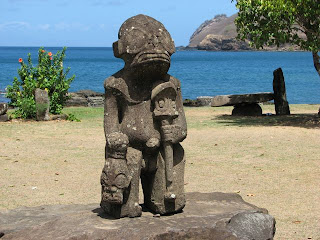 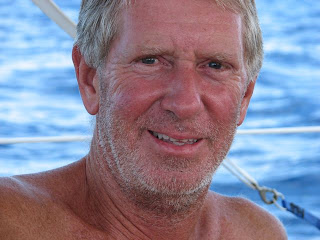 Nearly a month at sea and where did the blond go??? 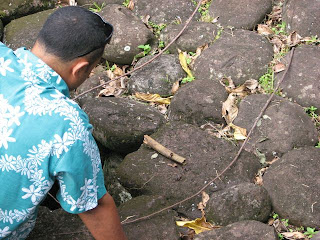 Left over bone from a "bone hole" 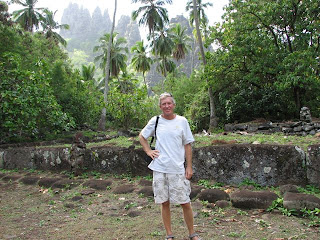 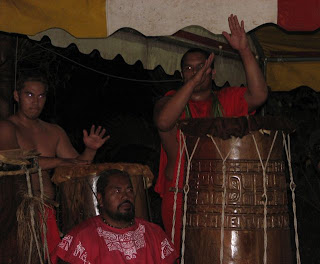 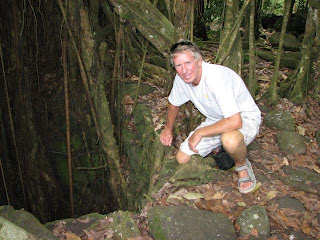 The "bone hole" - where the victims were kept for the sacrifice. Afterward their bones were put inside the hole. Sacred stone where the heads were cut off - Maria demonstrates! 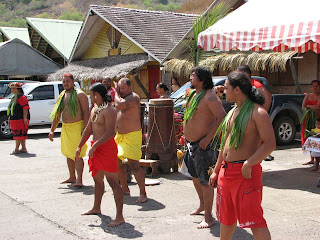 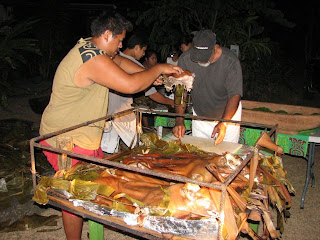 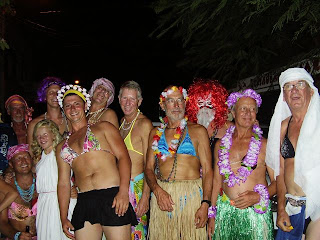 Party time with the other Rally sailors! 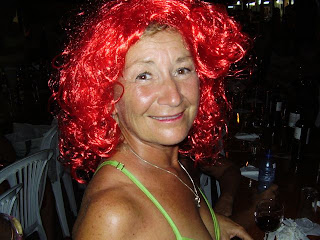 Nice hair that Maria wore at the party! 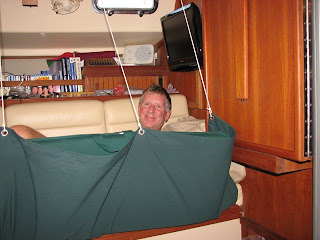 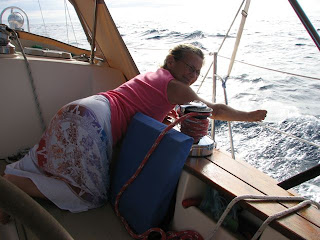 Maria taking out the trash 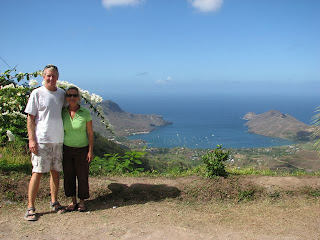 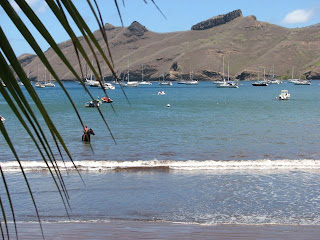 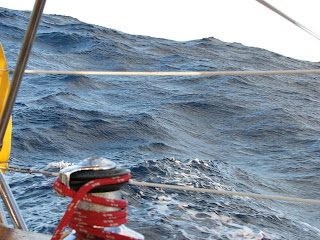 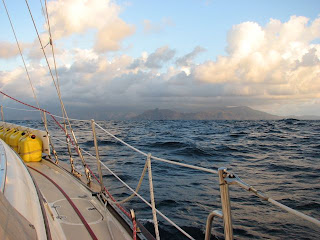 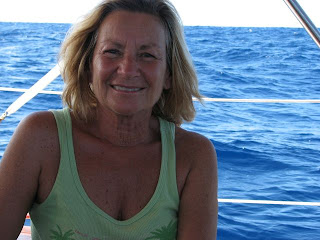 Maria after 23 days at sea 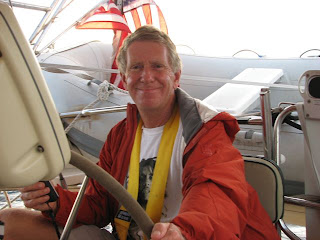 Steve, after 23 days at sea, staying up all night and hand steering without instruments until landfall
Posted by Aspen at 2:08 AM No comments:

Nuku Hiva, Ua Pou, Fatu Hiva, Hiva Oa are several of the spectacular
Marquesas Islands in French Polynesia. We visited Typee Valley where
Herman Melville of Moby Dick fame was imprisoned by a native tribe; We
saw where Paul Gauguin disputed the French authorities as he lived and
is now buried in these islands; we visited the bay where Robert Louis
Stevenson penned Treasure Island; and we visited sacred tiki sites and
bone holes where human sacrifices took place as recent as the 1920's.

These young islands show the scars of recent volcanic eruptions and the
huge spires that leap from the earth where their calderas once spewed
lava and ash to form these islands.

The Polynesian people are very warm and welcoming to wayward sailors.
Their language is now French because France controlled these islands for
more than 200 years. Their food also has a very French flair and their
grocery stores carry mostly French brands at a very French price!
Baguettes, croissants and French pizza are found everywhere in the
Marquesas.

The local fresh market had a variety of fruits and vegetables to buy but
you had to arrive early, at 4:30 am, to get the best selection! Things
available included many varieties of mangos, bananas, huge grapefruits,
breadfruit, paw paws, and even avocados.

The water in our anchorages was clean again but deep and it would have
been nice to take a daily swim, except for the tiger sharks that swam
around our boat. Since these islands are so young, they do not have any
reefs yet and only the deep ocean flows upon their shores. The
anchorages attract the predators from the ocean and they would love to
feast on a few sailors!

We were one of only a few sailors who also escaped the Marquesas without
a tattoo! The tattoo was first invented here and the tattoos are
spectacular. Many of our fellow sailors are now adorned with these new
symbols of their visit to the Marquesas.

One night we even had a traditional pig roast hosted by Rose Corser, an
American who settled on Nuku Hiva more than 40 years ago and is a
gracious host to sailors from around the world. The roast was really 2
pigs because it had to feed some very hungry sailors!

After checking in with the French authorities we were free to visit the
rest of French Polynesia, at least as far as Tahiti, some 900 miles away
where the WIFI works again, or so we hear.

The fuel in the Marquesas was rationed because of the number of Rally
boats that arrived all at once. Getting our allotment of 200 liters
onboard Aspen was quite a feat. Captain Steve had to scale a 30 foot
wall with a ladder, bring his diesel containers up one at a time, hike
to the fuel station with the containers, hike back to the wall with the
fuel containers, lower the fuel containers one at a time with a rope
into the dinghy that was being thrown about at the base of the ladder by
the huge swells and then motor away from the jetty wall before getting
swamped by the continuous spray coming from beneath the jetty! Bringing
little Aspen to this same wall to pump diesel onboard was not an option
we wanted to try!

So now we have some fuel and have sailed away from the Marquesas, bound
for the Tuamotus, also known as the Dangerous Archipelago, 700 miles to
the west. We should be there by Thursday mid-day, when the slack tide
will allow us entry through a difficult, reef strewn, shark infested
pass into the Atoll's lagoon. The atoll's name is Rangiroa, the 2nd
largest atoll in the world.

We will put more photos on the blog site once we get to Tahiti!

No 2 days were ever the same during our 25 day crossing of the mighty
Pacific Ocean. Storms, squalls, calms, torrential rains, burning days,
phosphorescence, dolphins, flying fish, sea birds and the night sky
painted with billions of glittering stars along with the full moon
became our world and our life.

We are looking for a place that does not rock and roll constantly, a
place where the smell of flowers fills the air and the sounds of people
become music. Ah, the Marquesas Islands of French Polynesia are looking
down on little Aspen anchored in these peaceful waters.

We made it! We crossed the enormous Pacific and survived everything
that nature threw at us, and more.

Has the journey somehow changed us? Have our lives become more
enlightened? Do we feel we are as one with nature and the universe?

Arrrrrrrr, we don't think so - bring on the rum!

It was 3:00 AM and Maria came off her watch an hour ago, waking Captain
Steve to begin his night watch over Aspen's journey. Steve took his
customary seat in the cockpit, watching the stars that painted the black
sky. All seemed right with the world when suddenly it happened.

An object flew into the side of Steve's face, like the punch from a
fighter, causing Steve to reel in surprise. The object then landed with
a thud on his lifejacket and began bouncing around, wings flapping and
it's body bouncing up and down. A kamikaze flying fish had decided to
try and leap across Aspen's cockpit and missed, landing hard against Steve!

The fish then lay still on the cockpit floor, trying to conceal itself
but the tactic did not work. Steve picked the monster up, all 8 inches
of him or her, and flung the creature back into the the sea.

You never know what might happen out on the trackless ocean!

Each morning we take inventory of the dead flying fish that litter our
deck. Today we counted 16. By the time we find them they are very stiff
and we don't even think of eating them. Out on the water we see the
flying fish skimming along over the waves on their journeys to who knows
where!

Steve ran the Rally net this morning. We talked with 27 other boats but
can't see any of them. We have not seen anyone for 14 days now, but we
are handling it pretty well, we have not gone stark raving mad - yet!

The person with the kidney stones has survived and is still sailing
toward the Marquesas. He is not cured but the pain is manageable it
seems. The others around us still have problems with generators, sails
and other smaller things.

Our sails roar like thunder and snap like lightning when the wind
changes or the seas toss us like a little cork. We just hope the mast
stays upright!

Just think of the giants of history that have crossed this mighty
Pacific Ocean: Magellan, Cook, Darwin and Heyerdahl among many others.
To sail upon the same waters as them is awe inspiring to say the least.
Edmund Leo, Maria's dad, did exactly the same thing over 60 years ago
when he was in the Navy and fought in the war. We are also following in
his footsteps.

Aspen is now in one of the most remote regions on earth. There is no
shipping traffic that comes this way and only airliners can fly high
above our heads without stopping. Getting help out here is not possible
unless you happen to find another sailboat near you. However, we are
with the Blue Water Rally and we are traveling with a group of 29 other
sailboats.

Why, you might ask? Safety is the reason that immediately comes to
mind. In our case, we have had 2 boats turn back from this crossing
already with engine failures. Another boat has lost their autopilot. At
least 2 other boats have generator problems and cannot charge their
batteries efficiently. Another boat has lost their SSB radio and cannot
transmit any longer. But the most immediate problem is a medical one
with one of the boats. The captain has developed kidney stones!

Immediately a call went out for assistance. The boats nearest them
changed course and arrived near the boat with the medical problem within
two hours. Luckily there is a midwife onboard the rescue boat and she
was transferred onto the other boat to help. Then the radio sprung to
life with information from the medical people in the Rally. Right now
another Rally boat is sailing back to lend the assistance of their spare
crew member to get onboard and help out.

As you can see, things can get pretty serious very quickly out here. And
we were just worried about running out of rum!

The Southern Cross has disappeared among the clouds that have covered
the sky for the past 7 days. But the good news is that we have covered
more than a third of our distance to the Marquesas! Lucky for us, we
have modern day navigation equipment called GPS. We can pinpoint our
exact location at any time of the day or night. The mariners of old had
to rely on the sun and stars for their position. But if you cannot see
the sun or the stars you are out of luck!

Aspen's engine is humming now and both sails are crashing and banging
through the still air. The torrential rain has sucked all of our wind
away! I guess we are nice and clean with all this fresh water cascading
down upon us.

We will keep you posted about the rescue effort as things progress.