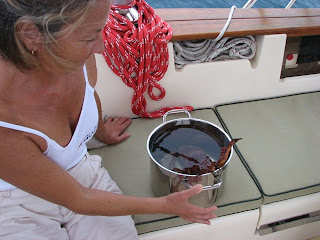 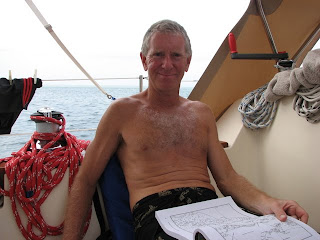 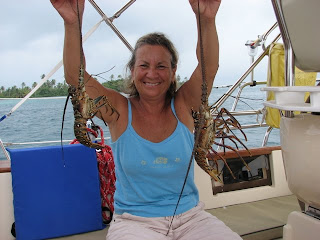 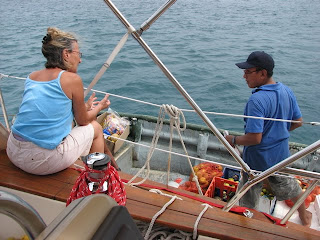 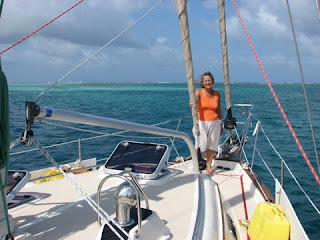 The view from Aspen's bow 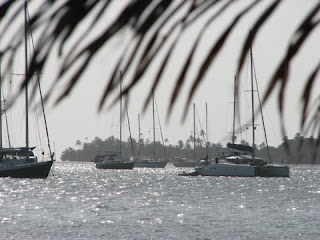 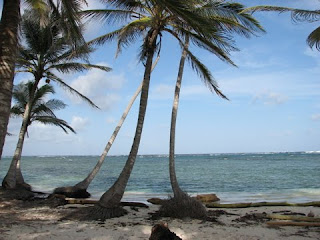 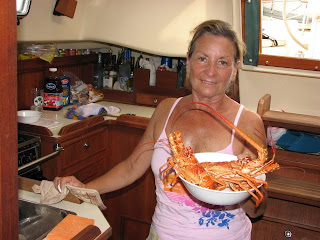 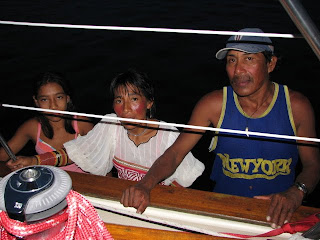 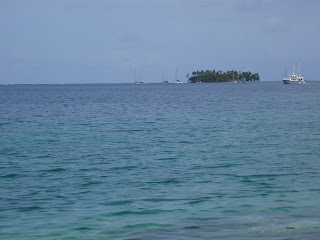 Scenery in the San Blas Islands 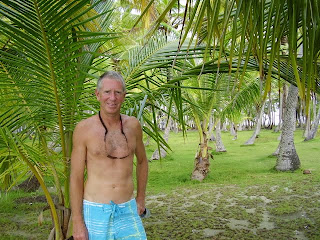 Our own little island 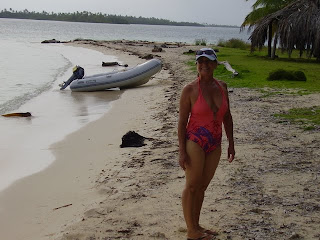 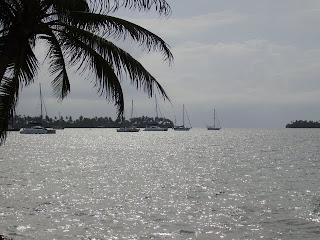 Aspen is the sailboat farthest away 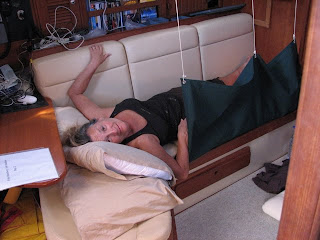 Maria resting after her watch 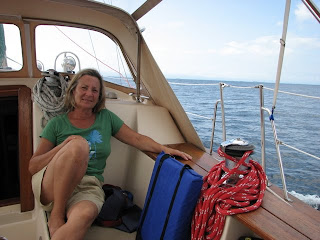 Sailing on the Caribbean Sea 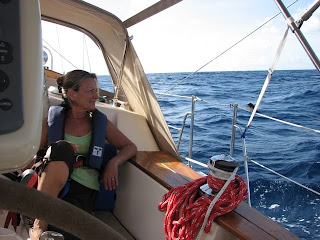 It was a little lumpy and bumpy at times 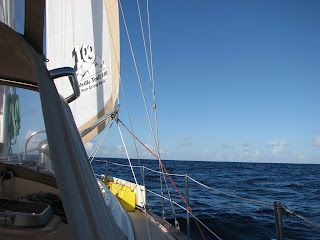 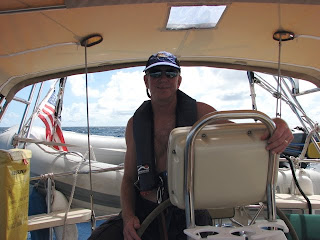 It was hot out!

We are finally rested from our non-stop, 1,200-mile sail from Trinidad to the wilds of Panama. Sailing in the middle of the Caribbean Sea was nice because we picked a very nice weather window. The following seas and winds made this notoriously rough passage easy for Aspen. There were still the midnight squalls and sail changes that always occur but they were manageable during the trip.

Along the way we made friends with hundreds of dolphins who played in our bow wave. The flying fish were everywhere, skimming across the tops of the waves on their daily adventures. We even had a bird visit us one afternoon. The small bird sat on our lifelines to catch it’s breath before moving south toward the horizon.

It was quite a challenge for Maria to cook during the passage. Aspen would rock and roll from side to side with the never-ending swells. Maria was juggling pots and pans on the stove and trying to keep the food inside of them, instead of on the floor where they wanted to be! She served up many delicacies, among them were macaroni and cheese, pasta, seared strip steaks and even a nice shrimp pasta dish.

Maria was on the 10 pm to 2 am watch and Steve took over at 2 am. Once the sun rose Maria handed out the hard boiled eggs that really tasted great! During the day we would both take naps but one of us would always be watching for ships. Sleeping below in the main salon was very similar to sleeping in the middle of an amusement park. There were noises coming from everywhere and they were not soft! Clanging, banging, crashing and shrieking sounds came from every possible location you could imagine. Maria tried to soften the sounds with expertly placed towels and cushions but it did little to suppress the deafening crescendo.

But sleep we did. No amount of noise kept us awake. Exhaustion tends to do that to a person.

We had other ships for company out on the sea as well. One fine day off the coast of Venezuela a super tanker decided to approach us on the same course we were headed towards him. Our AIS system displayed the amount of time we had until impact, about 8 minutes, as he hurtled toward us at 21 knots. Our trusty AIS system also gave his vessel length in nautical miles, instead of feet because he was so large. As he entered our 2-mile danger zone, alarms started going off to warn us of his approach – duh! He was quite a sight and right ahead of us coming fast. Captain Steve calmly called the super tanker on the VHF radio and asked him his intentions. After several calls the super tanker finally answered his radio and advised that we should pass port-to-port. Well, we wanted our port side to be way far away from his port side so we angled Aspen to the north to put more distance between us and his steel hull. We passed within about 200 yards of him and even then the distance seemed too close!

As we got closer to Panama the ship traffic increased. Most of the ships were heading toward the Panama Canal and the Pacific Ocean. We were going about 100 miles south of there to the enchanting San Blas Islands.

We needed good light to enter the small passes that lead through the reefs that guard the San Blas Islands. We timed it well and entered our pass at 8 am with the light behind us, allowing us to see the reefs on either side of the channel. We had just entered the Eastern Holandes Cays of the San Blas Islands after sailing a total elapsed time of 10 days and 3 hours. Another 25 minutes would bring us to an anchorage where we anchored in clear waters behind a small cay. To our east was a reef that protected us from the huge swells that sweep through the Caribbean. A welcome calm engulfed us as we slid our anchor over the side and Aspen seemed to smile too.

The San Blas Islands are comprised of 365 islands, about 36 of which are inhabited. We are in Kuna Yala territory and the locals are called Kuna Indians. The Kuna are part of Panama but are also fiercely independent from Panama. They govern their own islands and have their own language. The Kuna language is not Spanish but the schools now teach Spanish to the young children. Kuna Yala is still part of Panama with the Kuna islands stretching more than 232 miles in length along the northeastern coast of Panama.

The Kuna are friendly and gentle people who use dugout canoes as transportation about their territory. It didn’t take long before they spotted us and came for a visit. They paddled and sailed up, offering us lobsters, fish, Molas and bracelets to buy. The lobsters were sitting in the bottom of the small dugout canoe, thrashing about. We simply pointed and picked out two nice sized ones. That cost $10. The next day another dugout canoe appeared with a Kuna that we had met before. He sold us 5 lobsters for $6. The prices are getting better! Then the next day another Kuna came by with a large King Crab that we had requested. It was huge and cost $3. So we aren’t starving out here! The Molas are another story.

The Kuna society is matriarchal. Women are the breadwinners while the men fish and grow crops. Molas are the cash crop for the Kunas. A Mola is an embroidery work that is used as an appliqué` on women’s blouses. They are extremely colorful and the more intricate ones are collector’s items. A different dugout canoe had a woman sitting in the middle who is holding up Molas. Maria was on a shopping tour now and was delighted in seeing so many choices of things to buy! We ended up helping support the village this day.

The following day another Kuna approached Aspen. This time it was a master Mola maker named Venancia. Venancia had several 5-gallon containers containing his Mola art. After inviting him onboard, he began displaying his work in the cockpit of Aspen. His Molas are spectacular! Within minutes Aspen’s cockpit is awash in color with Molas hanging everywhere. Once again Maria goes shopping and helps support another Kuna village.

Yes, Venancia is a man. It seems that even in a matriarchal society some males take on more feminine characteristics and enter the Mola crafting profession.

There is a small cay at the head of our anchorage near Banedup Cay called BBQ Island by the gringos. That name is easier to say than the actual Kuna name. The small cay is filled with palm trees and surrounded by pure white sand beaches. A large reef protects the island from the deep Caribbean Sea. Turtles nest on the island and there is even a sailing couple that makes sure the island is litter free. Yes, Reggie and Debbie live on their sailboat anchored off the island as they have for the past 8 years, tending and nurturing this little island. They even have a lawn mower on their vessel that they use to trim the underbrush!

BBQ Island is exactly ? mile around. Captain Steve knows this because he runs around and around and around this little island every morning for his workout! Luckily the Kuna have not spotted him yet to offer their impression of the crazy gringo.

There are no grocery stores, no markets and no fueling stations in the San Blas. Everything comes here by local boat where they tie up to your vessel and offer you fruit, vegetables and fish for sale. We are running low on fuel and meat so we will head to Colon, Panama next to refuel and re-stock with these essentials before heading back to Kuna Yala for the holidays.

Steve and Maria
Posted by Aspen at 10:33 AM No comments:

Hi all. We made it to the San Blas Islands, Panama after 10 days, 3
hours and 25 minutes of non-stop sailing from Trinidad. It was great!
But we did run out of wind the last 2.5 days so we had to motor then. We
arrived with 14 gallons of fuel left! Luckily we still have jugs with 40
more gallons that we can use.

We are anchored in a place called the Swimming Pool in the Holandes
Cays. It is a calm and sheltered area between several small islands and
reefs. It is really calm and beautiful here. The islands are uninhabited
and the local fishermen came by yesterday selling lobsters ($5) and fish
and the women paddled by selling Molas. There are 10 other boats in the
anchorage and it is pretty deserted. Nice! The snorkeling is excellent.
I saw lots of fish and even a stingray yesterday when I dove on the
anchor. The other sailors here are also very friendly.

Maria is enjoying sitting still and not rocking and rolling when she is
cooking or taking a shower. What luxury!

Sail on Sail on Aspen...
Steve and Maria 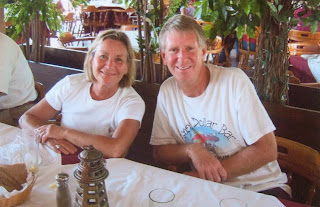 It is time to go sailing! Hurricane season is winding down, the Christmas season in Trinidad is in full swing and the islands are calling us. Besides, my Trinidad interpretation project is on hold until the new data arrives at the beginning of the new year.

Aspen needs to feel the warm Caribbean Sea swirl around her hull and the tropical trade winds push her on a new journey.

Leaving the easy marina life is always a challenge but out onto the ocean we will go. Our next stop lies to the north at Grenada. Then we will point Aspen’s bow to the west and chase the setting sun.

Maria says, "I cannot store one more object on this boat. The lockers are full of food and Steve has lots of M&M’s stored onboard. The rain gear is ready and I have my belt next to the stove so that I can cook while we are sailing. We have been saying goodbye to all the other cruisers who are not ready to leave yet. Most of them are waiting for parts! We attended a party the other night with lots of Canadians and Brits. We tried to teach them to speak English. The Canadian woman, who wrote the book Embarrassment of Mangos, brought some interesting foods to sample. Several local Trini couples also attended and they too had food for us to taste. There was also some rum! We hope Aspen still floats with all this added weight and can get us there quickly and safely."

Oh yes, we received 2 out of 3 of our packages. What a surprise that was!

So for now,
Sail on sail on Aspen…