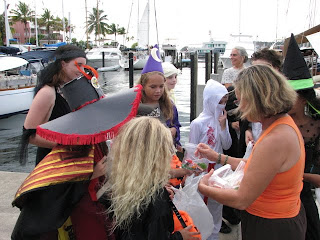 Maria handing out treats to the ghosts and goblins on the dock in Trinidad.
Posted by Aspen at 5:03 PM No comments:


View S/V Aspen in a larger map
Posted by Aspen at 7:21 PM No comments:

Another HHH Run in Trinidad

The Hash House Harriers are known worldwide as a drinking club with a running problem. Steve likes the running problem part of the club! The runners, also known as hashers, meet every 2 weeks and run on trails throughout the countryside. The route is poorly marked prior to the start by the hares and it is a challenge to even find the start of the trail.

The jungle run on Saturday had about 150 people who took nearly 15 minutes of running to find the actual beginning of the route. Then things got much worse.

There was mud, rocks, trees with thorns that protruded half an inch that would impale many a stray hand, cliffs, bottomless holes in the trail and of course the ever present oppressive heat and humidity of Trinidad.

Wisely, Maria stayed at the start where the beer was.

Here are some of Steve’s muddy thoughts about the run:
There was a local hand painted sign posted on one of the trails, “Beware, lots of snakes”. Steve saw the sign behind him after he had already come off this trail!

There was a cliff with a rope to hold on to as we plunged down into the depths of the jungle. The rope was 25 feet long and the cliff was 75 feet long – it was a long tumble and slide down from the short end of that rope.

At the end of the slip/slide down the cliff were huge trees to catch my wild fall. The screams ahead of me didn’t really warn me of the half-inch thorns that stuck out of the trees. At least the blood mixed well with the mud and sweat that soaked my body.

A well-placed log with several thin strips of nailed wood helped us cross a gorge where we could not see the bottom. The log creaked and bent but luckily did not break. The sticker bushes at the far end gave us a good handhold too.

All of this was within the first mile of the run!

After more than an hour, the runners struggled into the finish area looking for sustenance – beer of course! Well, there was also rum if you didn’t like beer. The fish stew didn’t really appeal to us so we didn’t eat any of that.

Afterwards, Steve and Maria talked with a virgin hasher about the run and he said, “Ah helped two of dem across de tree. We scatter in da mud, push through bush. Den we walk through some suspect mud. Da river water looked merky and dark stink. All dem hashers skipped, jumped and danced on da rocks to avoid de water. It looked like stuff flowing from pig pens. At one part, we see pork skin floating on da water.”

We think he was saying that the run was great fun!

Maria says she prefers the air-conditioned gym to a hash run.

Where is the Mailman?

Or better yet, where is our mail?

Steve needed a software update for his geophysical work. Aspen needed a cable that is not available in Trinidad for her navigation hardware.

Let’s use the computer, go online and arrange to have these things sent to Trinidad! No problem mon. Steve has his software sent from Houston and the hardware cable is sent from Connecticut. Then we receive the bad news…

The items have been shipped via USPS, 5-day delivery. What?!??? But they were supposed to be sent FedX! Emails sent to the companies verified that they shipped them the cheapest way to Trinidad. Calmly, Steve explains that there are no post offices in Trinidad. Well, at least none that really function.

10 days later we are still wondering were our packages might be! We will keep you updated on our USPS mail saga!

Steve and Maria
Posted by Aspen at 6:16 PM No comments: