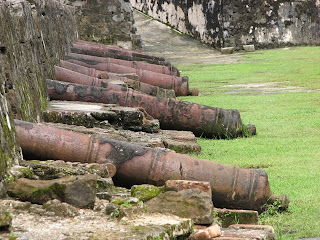 The cannons are all quiet today...

They’ve traveled through the doldrums, shallow lagoons and hurricanes
They’ve logged several thousand soggy miles with water on their brains
But Christmas ‘tis the season better suited for dry land
They’ll tell some lies, meet some spies and dance barefoot in the sand

These sailors spend their Christmas in the harbor on the hook
Panama’s hot so no work today,
And let’s shelve the old logbook

Christmas is a time that’s filled with music, rum and cheer
The waterfront is reveling - the season has begun
These sailors spend their Christmas in a harbor having fun!

The continents keep drifting but the children sing and play
‘Cause nothing really matters, after all it’s Christmas Day

(with apologies to Jimmy…)

Merry Christmas and Happy Holidays to all our friends, wherever they may be!!
Posted by Aspen at 9:55 PM No comments: 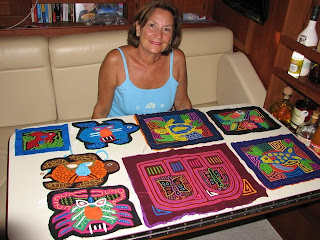 Maria with some of the Mola artwork 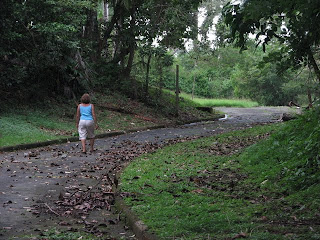 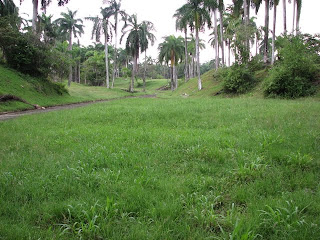 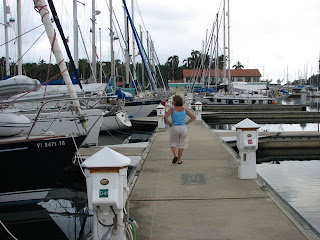 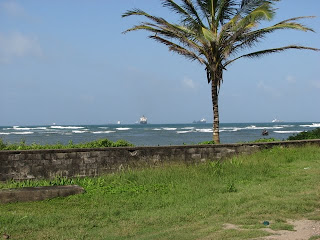 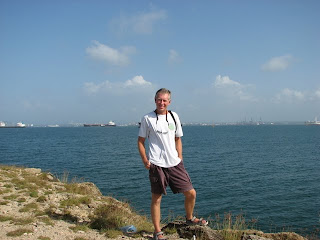 The ships behind Steve are waiting to transit the Panama Canal 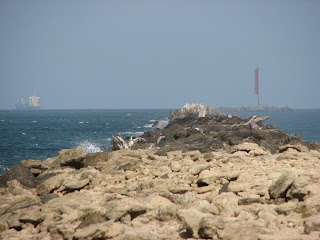 This is the breakwater that protects the harbor. The ships pass through the opening. 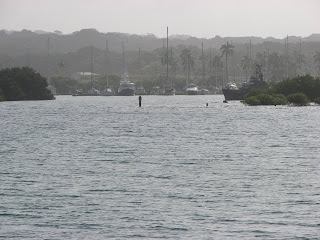 The entrance to Shelter Bay Marina s to the left of the big post. A reef is to the right! 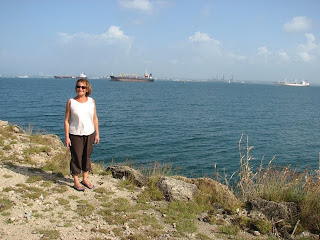 Maria standing on the breakwater with the harbor behind her

It is the dry season, finally, in Panama. That means that the deluges that are called rain only occur less often than every day, as in November. The temperature hovers around 95 degrees with 98% humidity though. Remember, we are only 9 degrees or about 550 miles north of the equator.

Aspen is tied onto a nice floating dock here in Shelter Bay Marina, Panama. This is in the middle of the abandoned US Army base that used to be the vast expanse of Ft. Sherman. Now this area is a huge national park and the jungle has reclaimed most of the land around us.

We walk throughout this area without worries because there are heavily armed Panama military guards that surround the perimeter of the old base. It seems that Panama doesn't want any more destruction of what is left here.

The old base is lost in a time-warp. The buildings are crumbling and abandoned while the jungle reclaims the land at will. After the US gave the Canal to Panama on December 31, 1999, the local governments fought over the land and since no one could win they just looted everything in sight.

So here we are, in the middle of the jungle, aboard Aspen, with strange creatures all around us, connected to the internet. Isn't this great?!?

Steve runs on the abandoned roads far and wide. One of the roads heads north and west to the river called Rio Chagres. This river was the richest in the world long before the canal was built. The Spanish explorers used the Rio Chagres to transport Inca gold and silver from the Pacific side to be loaded onto ships that waited on the Atlantic side, bound for Spain. Billions of dollars worth of gold flowed down this river. Even gold from the California Gold Rush came down this river headed for New York.

At the Caribbean entrance to the Rio Chagres stands a fort named Fort San Lorenzo or Castillo de San Lorenzo that dates back to 1592. It was built by the Spanish King Philip II only 100 years after Columbus arrived. The run up to this fort is spectacular!!! The old army road winds through the jungle with monkeys screaming from the tree-tops and unseen things making noises in the jungle all around. The fort sits atop a high bluff and guards the river entrance. It was at this spot that pirates like Sir Francis Drake and Sir Henry Morgan fought the Spanish for control of the riches flowing from Panama.

The run to the fort is nearly 7 miles one way but the rewards are without equal. Standing on the same spot that the conquistadors and pirates tread was humbling. Even today the mighty Rio Chagres is vital to Panama as it provides the Panama Canal with the necessary water to open and close the huge locks!

We are awed by the historical significance of Panama. The ghosts of The Camino Real, Portobello, Balboa, and even Bolivar are forever linked to this strategic country.

Maria keeps Aspen in great shape for the sailing adventures that lie ahead. Grocery shopping is always an adventure as you could imagine. There is a shuttle bus that departs twice a day from the marina that takes sailors to the nearest grocery store, about 30 minutes away. The store is well stocked and the prices are the best we have seen in the Caribbean. There are even lots of US brands to choose from. Knowing Spanish really helps when you are ordering meats from the meat counter! We found that our Spanish is pretty rusty but we are getting lots of practice using it again. The real adventure is getting the groceries back to the marina and aboard Aspen.

The road to and from the store passes next to and across the Panama Canal via a very small one lane bridge. This bridge is moved out of the way when ships are using the locks. Ships have priority so we can sit at this little bridge quite a while waiting to cross. At least we see the huge ships go by as we wait.

The bus that transports us is a small model that holds 25 people. Once you leave the grocery store to return to the marina, you have the same 25 people inside PLUS lots and lots of groceries. The bus also transports sailor's gas cans, propane cylinders and diesel jugs back to the marina. You can probably imagine what this bus looks like careening through the jungle on horrible roads loaded with gringos who are guarding their precious food and leaking fuel containers! The driver is oblivious to all the chaos going on behind him as he tries to avoid running over the snakes and animals that are trying to share the road with him. Every day is an adventure down here!

There are more pictures posted on the blog if you are interested.

Steve and Maria
http://steveandmariasailingaspen.blogspot.com/
Posted by Aspen at 2:45 PM No comments: 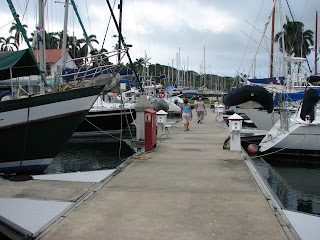 The view from our dock at Shelter Bay Marina, Panama 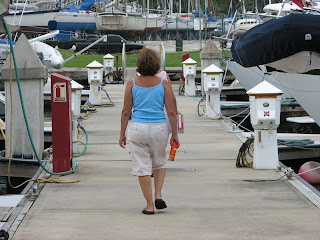 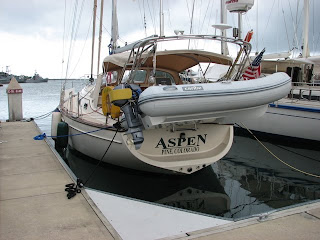 Aspen resting in her slip at Shelter Bay Marina, Panama
Posted by Aspen at 8:25 AM No comments:

We sailed west from the San Blas Islands for 10 hours to an anchorage 62 miles away called Isla Linton. This is a fair anchorage with quite a few boats anchored around the bay. We anchored between the island and the mainland of Panama so this was our first time so close to the isthmus itself.

On the small island of Isla Linton there is an abandoned house with a place you can tie your dinghy up and go ashore to explore. It seems that there are many monkeys on the island and they like to visit with you when you dock your dinghy. However, they expect food and if you don’t have any food or you run out of food while feeding them they become aggressive and will attack you. These are some really nasty monkeys!

So with that in mind, we decided to stay on Aspen and get some sleep instead!

The following day we sailed to the Panama Canal Zone and the city of Cristobal/Colon. One mile from the massive Panama Canal breakwater we announced our intention to the authorities at Cristobal Control that we wished to enter into the man-made, continent-sized harbor.

Aspen: This is the sailing vessel Aspen, we are 1 mile from the massive breakwater with the enormous waves crashing over it and we intend to enter the channel.

Cristobal Control: Sailing vessel Aspen, you may proceed through the breakwater and enter the channel but be advised there is traffic in the area

Aspen: Thank you. I will follow the gigantic cargo ship, Chilean Reefer - who is directly ahead of me, through the breakwater as I am surfing down these huge waves

Admiral Maria: Not silent – Captain Steve, why are we going behind that big ship?

Captain Steve: Because he is bigger than us and I am letting him go first

Captain Steve: Yes because I am trying to avoid the very big ships that are trying to run us over

Following that experience we were safely behind the massive breakwater and once again in calm water, motoring through the hazardous anchorage area where they keep the really nasty ships that carry explosives, oil, gas and nuclear waste. Arrrrrrrh!

Shelter Bay Marina is our destination, on the far western side of the harbor and within the boundaries of the previous US Army Base called Fort Sherman. The Marina sits within a vast national park, now that Fort Sherman has been abandoned (by Jimmy Carter). But we will once again have WIFI and temporary shelter from the storms that sweep through this part of the Western Caribbean. Welcome to Panama!

Steve and Maria
Posted by Aspen at 8:50 PM No comments: