Rocks, Kingdoms, Pigs and a Farewell

Niue was our landfall after we left Rarotonga, Cook Islands. The Cook
Islands are well-known as a tourist destination for New Zealanders and
they flock there for their vacations because of all the nice beaches,
snorkeling and nice people. Niue on the other hand is not on the normal
tourist route. Niue has less than 2,000 tourists in a season, other
than yachts that visit there.

Niue is a flat limestone rock in the middle of the ocean with nothing
around it. The anchorage area is not very protected and it can be
uncomfortable. However, Niue is a nice way to break up the long,
difficult and bouncy sail to Tonga so we decided to stop and have a
look. It was also nice to get out of the large seas too!

Wow!!! The water around Niue is the clearest water in the world. The
Niue Yacht Club lays out moorings to attract the passing sailor so we
tied to one that was in 120 feet of water and could easily see the
bottom below us. Because the island is limestone there is no sediment
to run into the ocean to cloud the water. Also, because the water is so
deep right up to the shore whales spend their time here playing among
the moored yachts. We didn't see any whales because we were about a
month too soon. Oh well.

The island welcomed us with open arms. The locals were extremely
friendly and the Yacht Club could not do enough for us. The commodore
even drove us around in his ancient Mercedes car showing us the sights
of Niue. The really really disappointing thing that we encountered here
was that the island had run out of beer. Yes, the island had no beer!
The shipping terminal screwed up the last order and forgot (?!?) to
order beer for the island. The next supply ship is not due to arrive
until about the middle of July with their next supply. There might be
an uprising by then.

The island is riddled with caves, caverns and arches to explore. Hiking
on the jagged limestone was interesting but the rewards at the end of
the trail were well worth the effort.

The landing for our dinghy was very strange because there is no place to
put the dinghy to get ashore. Well to fix this, the islanders built a
crane with a cable that we grab and attach to the dinghy while it is
floating in the water. Then the entire dinghy is lifted onto a concrete
dock area and we leave the dinghy there. When it is time to return to
our boat we simply hoist the dinghy up with the crane again and plop it
in the water as we scramble into it and roar away. What an experience
that was!

After too short of a time on Niue it was time to sail to Tonga.

It took two overnights to reach the Kingdom of Tonga, the smallest
Kingdom in the world. Yes, a monarch still rules this land where 170
beautiful islands are sprinkled among a shallow azure sea. Tonga is the
first country in the world to usher in a new day. Yes, we crossed the
international date line now so we are a day ahead of all of you! I
guess we can see the future so if you want to know what is going on just
ask!

The Tongan people are Polynesian in origin and speak Tongan, along with
some English. The harbor where we anchored is called Neiafu, Vavau,
Tonga. This anchorage does not roll and is entirely protected from the
seas and winds. We can finally sleep at night here!

There are many reasonably priced restaurants just a short dinghy ride
away, run by New Zealanders, Australians and Canadians. They really
appreciate the sailors who arrive here because we provide 98% of the
income for the town. The food is pretty good with burgers, pizza, and
lots of fish dishes. Internet is supposed to be available but as usual,
the system seems to have become non-functional at the moment. Geeze.

We attended a local church service on Sunday and the singing nearly
lifted the roof off the old building! The reverberated amongst the
hillsides for miles around the village. It was quite spectacular to
hear them sing the Hallelujah chorus.

Captain Steve is able to run on the roads again and dodging the many
pigs is a challenge. Pigs run loose everywhere here, throughout the
villages and around the countryside. They are fast little things so you
have to watch out not to stumble over any of them at times!

The Rally yachts sailed together to another bay for a Tongan feast one
night. A long table with palm fronds was filled with every local fish
delicacy you could imagine. Along with the fish we had chicken, pig of
course, and many many types of fruit. The local people performed their
native dances for us and these included the fire dance before the feast
began. Every meal includes Kava which is the local traditional drink.
It is made from some kind of root and it is a type of alcohol. It
tastes like dirty dish water we thought!

The whale season is about to begin in Tonga and there should be more
boats arriving to watch the spectacle of whales breaching and splashing
about. For us it will be time to leave for the islands further to the
west, Fiji!

This is a journal of our experiences as we sail around this big blue
ocean. My Mother enjoyed reading our entries and passing them along to
her friends. She will be missed. The light from the full moon danced
around the waves as Maria and I sailed in the southern ocean towards the
island of Tonga. But something didn't seem right that night of June
25th. The sea was confused and even though the moon was full it's light
was not as bright as it usually is. Something was wrong. Steve's mother
passed away that night...

And Even More of Niue 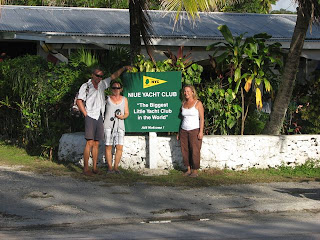 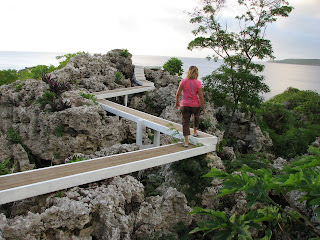 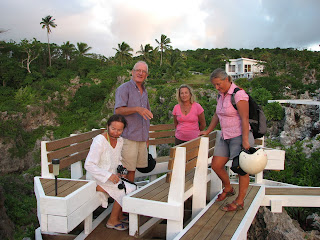 Fellow sailors on the walkway 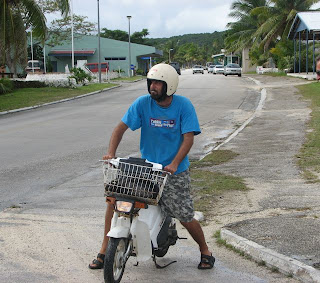 Another sailor out of the water 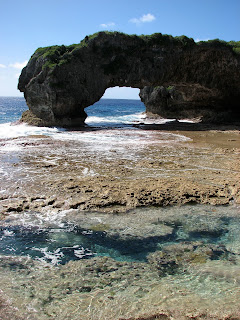 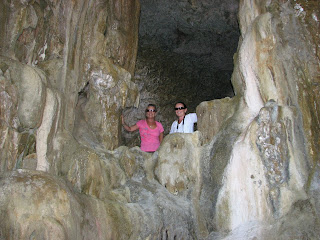 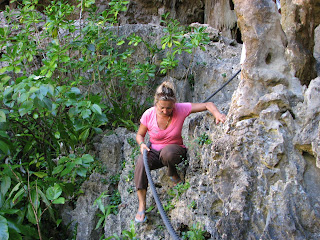 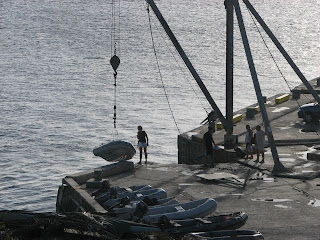 This is how you park your dinghy on Niue - using a crane! 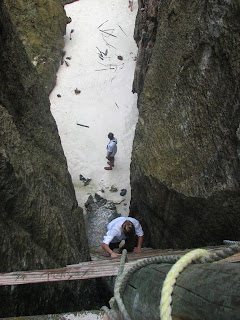 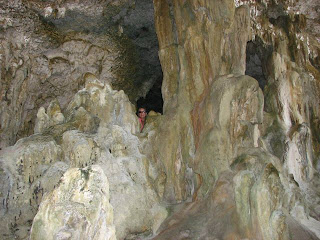 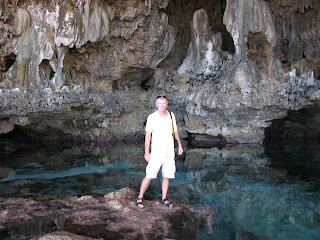 Great water in the caves too 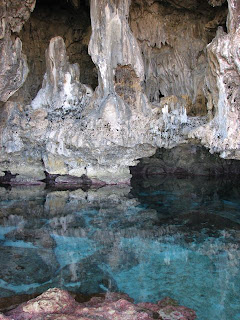 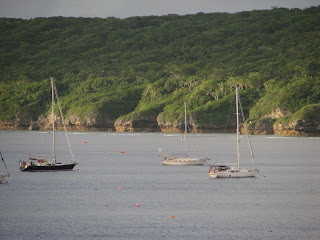 In the blackness of night they steal across the heavens as they hide
amongst the stars, waiting to vent their fury upon the sea.

Maria woke me for my watch at o'dark thirty as she wedged herself
against the lee cloth that secured her bed. No ships were around and
things looked good, she said as I went into the cockpit for my 4 hour watch.

We always reduce sail at night for safety and tonight was no exception.
Looking at Aspen's speed I was disappointed. 4.5 to 5 knots. That was
too slow if we wanted to arrive at Rarotonga, Cook Islands our next
port, in daylight. But the wind was blowing nicely, right on our beam -
the perfect place for Aspen.

I quietly unfurled more of the genoa and Aspen responded immediately.
6-6.5 knows now and nicely making way. That's more like it, I said to
myself.

The lights of the chartplotter instruments softly glowed in the cockpit
as I settled in to watch the moonless sky full of stars in the southern
hemisphere.

With the iPod playing in my ears and Aspen floating along the night was
mine to enjoy.

Watching the Southern Cross I noticed a change. The stars were
disappearing, 2, 3, 4 at a time as a puff of cold air startled me. Too
late! The squall hit Aspen like a freight train. Aspen heeled hard to
starboard as her speed shot up past 8 knots. I grabbed for the genoa
sheet so I could furl the huge sail before it shredded itself in the
wind. Without a word Maria appeared in the cockpit clawing for the other
genoa sheet.

Then the rain hit, wow! Within seconds we had our evening shower. The
deafening sound of the flailing genoa was no match for the scream of the
wind through our rigging.

Aspen's bow pitched high before burying itself deep into the wild seas
that had suddenly appeared.

I pulled on the genoa furling line with all my might and nothing moved.
I pulled again and again, still nothing. As the adrenalin took hole I
pulled once again and gained one small inch. Progress! Only 18 feet left
to go, I thought to myself.

With the rain pummeling into the cockpit Maria worked the sheet tension
as I inched the genoa around the furler, saving our precious sail from
certain destruction.

The thunder from the flogging sail was gone and in its place the roar of
the rain and wind continued. Wisely we let the autopilot steer Aspen as
we dashed below, soaking wet, into the safety of the cabin.

The squall lasted 30 minutes before the start reappeared and the wind
abated, letting Aspen to continue bouncing amongst the waves of the
Pacific Ocean.

Maria subtly reminded me about reducing sail at night as I climbed back
into the wet cockpit for the rest of my watch. 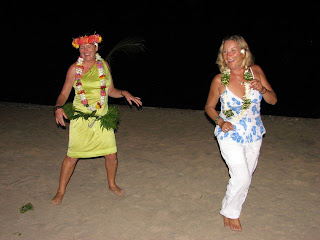 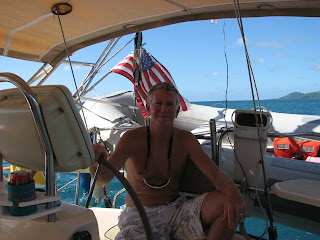 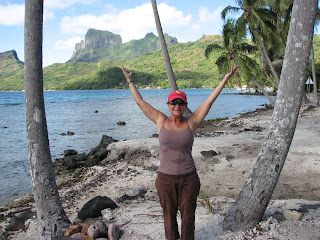 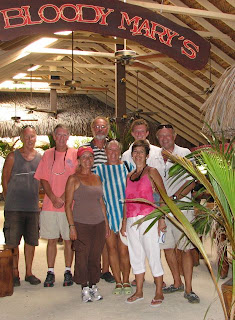 Hi all! Aspen and her crew have been enjoying French Polynesia for the past 6 weeks. The French wine and cheeses have been fantastic and the sailing is some of the best in the world. However, all good things must end so it is time to hoist the sails and push further westward, toward the Cook Islands.

Since Moorea we have visited Huahine (the savage island), Raiatea (the sacred island), Tahaa (the vanilla island) and Bora Bora (first born). Each one offers a glimpse of French Polynesia as varied as the wind.

Raiatea is etched in our minds as the island that launched a civilization. All of Polynesia: Hawaii, the Cook Island, Tonga, Easter Island, and even New Zealand's Maori originated from Raiatea. All of the long distance Polynesian sailing canoes were launched from one Marae on Raiatea called Taputaputea. Whenever a new Marae was built in the Pacific it always contained a rock from this most sacred site.

But Polynesia is now very French! Hmmmm. It seems that the missionaries descended upon Polynesia, drove the Polynesians from the mountains, abolished the tattoo, banned dancing and the wearing of flowers, prohibited the exposure of skin and converted as many of the native peoples as possible in the early 1800's. About 50 years later, the queen of Polynesia, Queen Pomare, aligned herself with the French and the rest is history!

Today, dancing has returned, flowers are worn everywhere, the tattoo is a national tradition, and the people are welcoming and friendly once again. Ooh la la!!!

The Blue Water Rally will soon depart these fabled islands, with Aspen heading out tomorrow for Raratonga. Tom on the S/Y Island Kea put together a nice video of Aspen and her travels around these islands. Just click here to see it:

We have more pictures posted on our blog as well, in case you would like to see them:
http://steveandmariasailingaspen.blogspot.com/